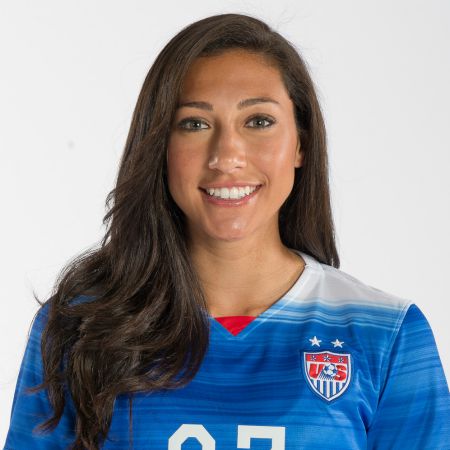 Christen had won several awards and trophies and is popular for breaking several records in the sport’s history. Also, she has played for a number of top clubs like Kopparbergs/Goteborg FC, Chicago Red Stars, MagicJack, and Pali Blues.

What is Christen Press Nationality?

Christen Press was born as Christen Annemarie Press on 29th December 1988, in Los Angeles, California, the United States of America. As of 2019, she is 31 years old and her horoscope is Capricorn. She is the daughter of Stacy Press (mother) and Cody Press (father).

She has two siblings as sisters, Channing, and Tyler. Her father was an American football player at Dartmouth before he became an investment banker, whereas her mother was a tennis player. Her sister, Channing played freshman season soccer at Villanova and Tyler played soccer at Harvard.

Christen holds an American nationality and belongs to white ethnical background. She began playing soccer when she was just five years old, and as the years went by it stopped being a hobby and became a career.

What is the Christen Press Relationship status?

Christen Press is rumored to be single. However she was once linked up with Nima Majd, but nothing is confirmed about the relationship. They attended high school together and had an affair at that time as reported.

Christen Press has an estimated net worth of about $1.4 million and around $36k as an annual salary. Also, she has endorsement deals with Nike and several other products such as Coppertone, Wheaties, and Hydrive energy drinks. In addition, Christen is the brand ambassador of Genesis Today.

Christen Press was part of the Women’s World Cup champion team and as a reward, she along with her teammates received around $400k as of the winning bonus.

Christen Press stands at a height of 5 feet 6 inches tall with a bodyweight of around 59 kg. Her hair and eyes are brown in color.