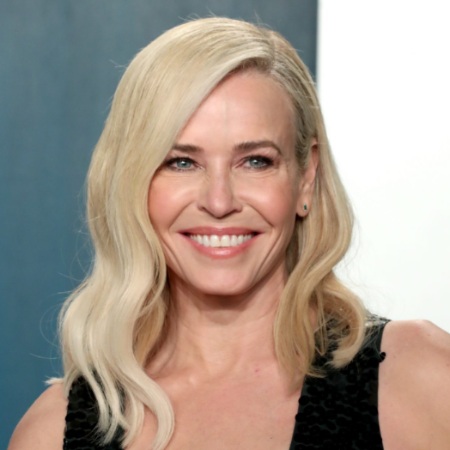 How old is the comedian Chelsea Handler?

On 25 February 1975 Chelsea was born. Chelsea is a native of Livingston, New Jersey, United States. As of 2022, Chelsea is 47 years old. Chelsea cuts her birthday cake annually on the 25th of February. Similarly, her birth name is Chelsea Joy Handler. Chelsea has the star sign of Pisces. Furthermore, Chelsea was born as the daughter of Rita Handler (mother) and Seymour Handler (father). Her father used to work as a car dealer while her mother is a homemaker.

Chelsea was born the youngest of six children. Her siblings are  Shoshanna Handler, Chet Handler, Simone Handler-Hutchinson, Roy Handler, and Glen Handler. Similarly, her father was Ashkenazi Jewish while her mother was a Mormon. Chelsea’s mother was diagnosed with breast cancer and die in 2006. Chelsea’s paternal grandparent’s name is Jacob Handler and Yetta Spector while Karl Max Stoecker and Elisabeth Alma Schielke are her maternal grandparents.

Did Chelsea Handler go to college?

No, Chelsea didn’t go to college. Similarly, Chelsea started her primary education at Livingston High School. After completing early schooling, Chelsea didn’t join the college due to some reason.

Is Chelsea Handler in a relationship?

Yes, Chelsea is in a relationship. Currently, Chelsea is dating Joy Koy. Joy is also a stand-up comedian by profession. Similarly, Chelsea and Joy met for the first time while performing in a comedy show. There is no exact information on when Joy and Chelsea started dating but made their relationship public in September 2021 through their Instagram handle.

After knowing each other for more than two decades, Chelsea and Joy started dating and are very passionate about each other. There is no information on the other step in their relationship but in the near future, we will surely see them tieing the wedding knot.

Who are Chelsea Handler’s ex-boyfriends?

Chelsea was in relationships with various popular celebs. Between 2011- 2013, Chelsea dated Andre Balazs while she was in a relationship with Ted Harbert from 2007 to 2010. in 2010.

Similarly, Chelsea encountered Bobby Flay and David Alan Grier from 2005 to 2006. In 2010, Chelsea was rumored to hook up with Dave Salmoni and Lenny Kratz.

Did Chelsea Handler sleep with 50 Cent?

Chelsea and the American rapper, 50 Cent dated in 2010 and haven’t dated each other. In 2020, Chelsea also stated that she might get back together with 50 Cent as a joke after being in the highlight for endorsing President Doland Trump in the Presidential election.

Similarly, Chelsea also told that she would even award him if he changed his mind. During some interviews, she said:

“It’s just not real and it’s very hard to maintain a relationship when you’re married or get involved with another celebrity. It’s fun for a little hook-up, but it’s not ever going to be something serious … but I definitely didn’t have sex with 50 cent for attention.”

Does Chelsea Handler have kids?

No, Chelsea doesn’t have any kids. Similarly, Chelsea hasn’t had children in any of her relationships. Chelsea is happily continuing her comedian career while enjoying her dating life.

How much is Chelsea Handler’s Net Worth & Salary?

Chelsea has an approximate net worth of $35 Million as of 2022. Similarly, Chelsea has earned this huge fortune from her comedian. Chelsea earns around $10 Million as her annual salary. This income includes Chelsea’s all property and assets as well. Besides this, Chelsea gets a good sum of money from the ads and sponsors as well and is an extremely well-paid brand endorser.

In a very short period of time, Chelsea became successful in making her name in the public. As of now, Chelsea is living a happy and lavish life with her family members. In the upcoming days, Chelsea’s net worth and annual salary will surely rise up.

No, Chelsea is not living in the Mansion of L.A.’s Bel Air. Recently, Chelsea sold the grand mansion at a huge price of $10.375 million. in 2010, Chelsea hs bought the house which has six bedrooms, and seven bathrooms, and was extensively renovated by Chelsea.

No, Chelsea and Ruth Handler are not related to each other. Similarly, Chelsea and Ruth’s only surnames are similar. Ruth is an American businesswoman while Chelsea is a comedian by profession.

How much does Chelsea Handler weigh?

Chelsea stands at a height of 5 feet 6 inches. Similarly, Chelsea has a body weight of 56 kg and her body measurement includes 32-26-32 inches. Chelsea has a beautiful pair of blue-colored eyes while her hair is blonde in color.

What is the nationality of Chelsea Handler?

Which ethnic background does Chelsea Handler belong to?

How much is Chelsea Handler’s Net Worth?

Are Chelsea Handler and Ruth Handler related to each other?

No, Chelsea and Ruth Handler are not related to each other. Similarly, Chelsea and Ruth’s only surnames are similar. Ruth is an American businesswoman while Chelsea is a comedian by profession.