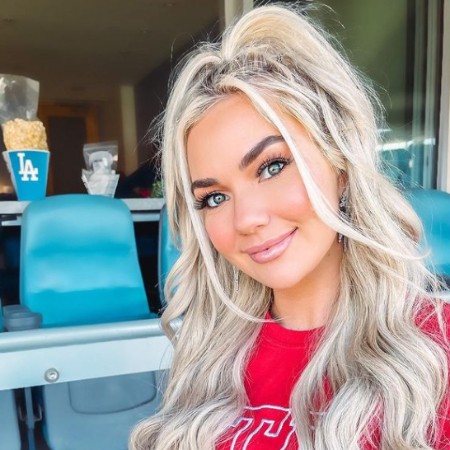 How old is Chelsea Freeman?

Chelsea Freeman came into this beautiful world on 24 April of the year 1991 in South Florida in the United States of America. As of 2022, she is 31 years old. According to astrology, she has the sun sign of Aries. Her full name by birth is Chelsea Marie Goff. Freeman celebrates her birthday every April 24 with her family and friends. Chelsea was born to Warren Goff (father) and Tana Goff (mother).

She is one of three children of her parents. Freeman’s parents are English. The name of her siblings is Josiah Goff (brother) and Tori Goff (sister). Chelsea grew up with her siblings in Pompano Beach. Her mother runs a home loan business while her father runs a digital marketing services business. Chelsea holds American nationality and belongs to a White Caucasian ethnic background. Likewise, she has faith in the Christian religion.

Where did Chelsea Freeman go to College?

Chelsea has completed her primary-level schooling at a Local High School in her hometown. For her university study, she enrolled herself at the University of Central Florida. She graduated from the Florida university.

Chelsea is living a conjugal life right now. Freddie Freeman is the name of her husband. They met each other when they were in college together. By profession, Freddie is an American baseball player. The pair met each other in the year 2011. After meeting shortly they started dating in the same year. Before getting married they dated each other for 3 years-long periods of time. In the year 2014, the couple officially tied their marriage knot on November 25. Thye has done their marriage in front of their relatives, family, and friends.

At the time of their engagement, Freeman gave them a beautiful and expensive diamond ring to Chelsea. Chelsea said yes to his proposal without a second thought. In one of the episodes of Say Yes to the Dress, Chelsea flaunted her ceremony and reception dresses. Right now they are sharing a very beautiful life with each other and they have 3 children with each other.

Chelsea shares three children with his loving husband Freddie. They have three sons. The name of his children is Maximus Turner Freeman (2021), Brandon John Freeman (2020), and Frederick Charles Freeman II (2016).

Freeman describes her babies Brandon and Maximus as twins with a twist. The twist she mean was the babies were born six weeks apart. Chelsea gave birth to Brandon on December 30 of the year 2020 whereas Maximus was born on February 14 of the year 2021 by a surrogate mother.

What is Chelsea Freeman’s Net Worth?

As of 2022, Chelsea has a net worth of around $8 million. She is earning a very handsome amount of money from her career in modeling. She did her modeling after her college graduation. Apart from her modeling career, she works in the selling field of amazon which is also a very profitable business.

On the other hand, Freeman’s husband Freddie earns an estimated net worth of around $40 million. He earns his worth from his successful career as a baseball player.

Where do Freddie and Chelsea Freeman live?

Freddie was asked a question about his pending free agency. He said he don’t want to leave Franchise. He added that he wants to spend the leftovers of his profession with the franchise which framed him in 2007.

What is Chelsea Freeman’s height?

Chelsea has a towering height of 5 feet 5 inches. She has a healthy weight of around 56kgs. Likewise, Chelsea has a pair of beautiful blue color eyes and blonde color hair.

Chelsea has done many plastic surgeries till now. However, she hasn’t revealed her old natural photo. But according to various sources, she has done buttock implants. Likewise, she has also gone through breast implants and different lips and nose surgeries too.

Which ethnic background does Chelsea Freeman belong to?

Where did Chelsea Freeman go to College?

Chelsea has completed her primary-level schooling at a Local High School in her hometown. For her university study, she enrolled herself at the University of Central Florida. She graduated from the Florida university.

What is Chelsea Freeman’s height?

Chelsea has a towering height of 5 feet 5 inches.