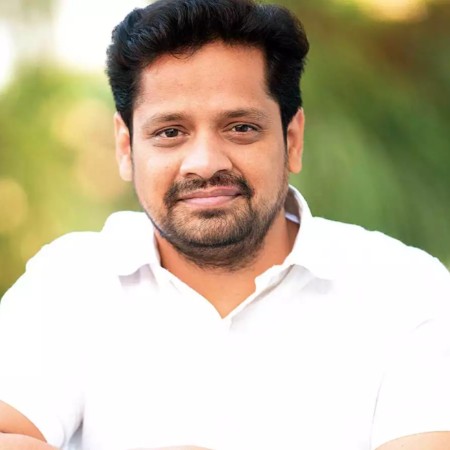 Indian film producer Bunny Vasu came into the limelight after he became the partner of GA2 Pictures. Additionally, he has also worked as the co-founder with Allu Aravind.

Who are Bunny Vasu’s family?

Bunny Vasu opened his eyes to this beautiful world on June 11, 1981, in Palakollu in West Godavari district in India. This makes Bunny 41 years old as of now. He celebrates his birthday every 11 of June with his friends and family annually. According to astrology, he falls under the Gemini sun sign. Bunny is born to a businessman father nad a government teacher mother.

He has one elder brother as his sibling who is an IT engineer. By birth, the full name of Bunny is Udaya Srinivas Gavara. Bunny holds the Indian nationality and belongs to South-Asian ethnic background. Likewise, he has faith and belief in the Hindu religion.

Where did Bunny Vasu complete his study?

Bunny has completed his primary level school at the Government School. After his elementary schooling, he enrolled himself at VIT, Vellore. He went to VIT to get knowledge about Chemical engineering. After he graduated with an engineering degree he worked in Mangalore Refinery.

Bunny is living a happy married life as of now. He married his long-term girlfriend. His wife worked as a banker. The pairs share two adorable children with each other. They are seen attending different events and hanging out with each other a lot of time. Bunny and his wife are also childhood friends of each other.

Is Bunny Vasu a father?

Bunny is a father of two adorable children. He has one son and one daughter. He shares these adorable children with his beloved wife. Bunny is seen posting many pictures of his children on his official social media more often.

What is the Net Worth of Bunny Vasu?

As of 2022, Bunny has an estimated net worth of RS.65 Lakh Indian rupees approximately. The main source of income for this huge sum of net worth is his successful career as a producer in the Telugu movie industry. He has produced many films now in which most of his produced movies are hit and are blockbusters in the Telugu industry.

Bunny is getting $ 32,000 as his salary month. Nevertheless, he is living a very happy and luxurious life from his salary and net worth. He is even linked with many production boxes as well that including Allu Arjun and Aravind.

What happened between Bunny Vasu and Sunitha Boya?

Sunitha Boya, a junior artist opposed the assumptions of the Telugu Chamber Office. She alleges that famous producer Bunny had gone ago on his word of delivering her part in a forthcoming film. On the other hand, producer Vasu conveyed how Sunitha has behaved. He said she had been pushing her to get a part in the movie. Additionally, he even said she changed her behavior later by showing so much aggression. Boya also threatened Vasu by saying that she will commit suicide.

What is the Relation between Bunny Vasu with Allu Aravind?

How tall is Bunny Vasu?

Bunny stands at the height of 5 feet 8 inches tall. He has a body weight of 72kg. He has attractive pair of black color eyes and black color hair. On the other hand, he has a body measurement of 38-32-36 inches.