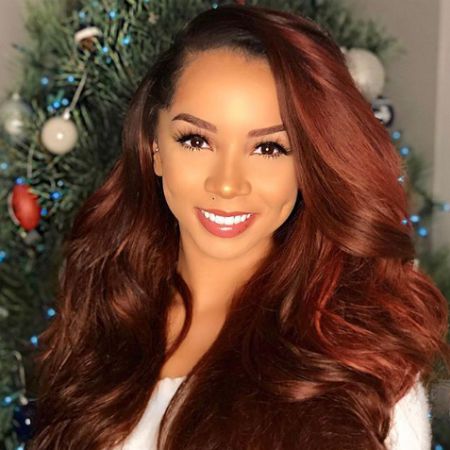 Are Brittany Renner and Lil Uzi Vert still together? Her Career and Books

Brittany Renner is an American social media star as well as a fitness freak who is famous for her fitness-related posts on her social media handles.

What is the Nationality of Brittany Renner?

Brittany Renner was born on 26th February 1992, in Ocean Springs in the state of Mississippi, the United States of America. Currently, she is 30 years old and her horoscope is Pisces.

She grew two siblings, Steven and Lexie. Although Brittany was born in Mississippi, she later moved to Los Angeles, California.

Britanny holds an American nationality and belongs to African-American and Caucasian ethnical backgrounds. Similarly, she follows the Christianity religion.

For her studies, Renner went to some middle and high schools. After that, she joined Jackson State University. There she played soccer and helped the team to win SWAC Championship in the year 2010.

What is Brittany Renner’s Relationship Status?

Brittany Renner shares a romantic relationship with her boyfriend, Lil Uzi Vert. Although they haven’t officially confirmed their dating affair, both of them are often seen together in the public eye.

In the year 2014, she had an alleged affair with football quarterback, Colin Kaepernick.

Apart from that, many rumors suggested her relationship with singer Trey Songz which was back in 2014. Although there is no exact confirmation of this affair, neither of them denied their secret relationship when asked in the media, so that gives a reason to believe that the relationship was real between them.

In 2014, she was in a relationship with a guy, Casey Therriault for a long time. Her ex-boyfriend, Casey is also a fitness model and a social media star. Together, they posted various pictures on their Instagram but later they separated their ways.

What is Brittany Renner’s Net Worth and Salary as of 2022?

Brittany Renner has an estimated net worth of $500k as of 2022. As per some online resources, her salary has stated around $200k, however, the exact figure is still missing from the media.

Brittany Renner’s biography is presented by a liberating journey through life and times. This book details the experiences of a woman whom some love and others love to hate.

It’s a behind-the-scenes look into her life. Some may categorize and prejudge without knowing her story, but here is her truth about her life story. The name of the book is Judge This Cover written by herself.

She became part of a controversy after hinting about her pregnancy with Colin Kaepernick. The post became a huge media buzz after Kaepernick denied the statement.

Many fans criticize Brittany’s personality but it is nothing to the social media celebrity. As of now, she is away from any kind of rumors and controversies.

Brittany Renner stands at a height of 5 feet 4 inches tall while her body weight is around 55 kg. She has a very attractive body with measurements of 32-25-36 inches.

Brittany’s hair is black in color while her eyes are dark brown in color.

Brittany Renner posts beautiful pictures of her on Instagram and social sites because of which she has generated a huge fan following all around the world. She has used Instagram as a strong medium to build up a public profile and generate brand value for herself.

Earlier in her career, she had worked as a salesgirl and then as a Zumba instructor. Also, she worked as a caregiver but Instagram created endless opportunities for her.

It was because of Brittany’s  Instagram profile that different organizations started to hire her for seminars, events, and boot camps. Moreover, she has been invited to conduct boot camps at reputed organizations like Microsoft and the Xbox.

Related Posts of Are Brittany Renner and Lil Uzi Vert still together? Her Career and Books