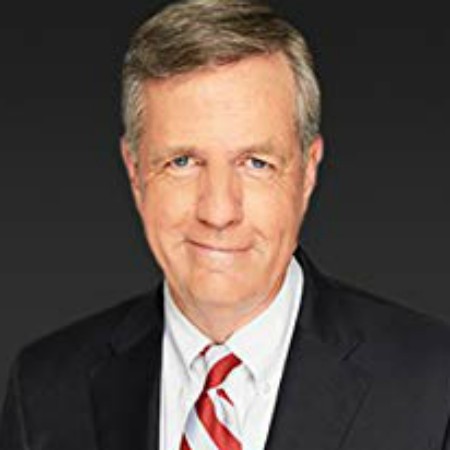 Brit Hume was born on June 22, 1943, as Alexander Britton Hume in Washington, District of Columbia, USA. As of 2022, his age is 79 years old under the zodiac sign of Cancer.

He is the son of George Graham Hume and Virginia Powell. Brit holds an American nationality and belongs to the white ethnicity.

Who is Brit Hume’s Wife?

Brit Hume has twice married in his life. He divorced his first wife, Clare Jacobs Stoner. Nothing much is known about Brit Hume’s first marriage to Clare Jacobs Stoner except that he is divorced from her. Before their divorce, they had a son named Sandy Hume (also known as Alexander Britton Hume Jr.) born on 2 September 1969.

He worked as a reporter for The Hill newspaper and is credited to be responsible for publicizing the story of the aborted 1997 political attempt to replace the Speaker of the House, Newt Gingrich. Unfortunately, Sandy Hume committed suicide on February 22, 1998.

To date, the National Press Club still honors his memory with its annual Sandy Hume Memorial Award for Excellence in Political Journalism.

In 1993, Brit Hume married Kim Schiller, who was formerly a Fox News Vice President and Washington Bureau Chief until she retired in 2006. The couple has two kids named Virginia Hume (daughter) and Louis Hume (son). Moreover, Hume and Kim Schiller have both been living happily until now.

What is Brit Hume’s Net Worth and Salary?

Brit Hume has earned a massive amount of money throughout his career as an American news anchor and author.  The popular media personality Hume has also collected a large amount of net worth which is around $14 million as of 2022.

Similarly, the successful journalist has accumulated an annual salary of $2 million with a handsome salary. In October 2018, Hume sold his Country home for $1.35 million. The 72-acre property is nestled in Marshall District and has a stable, a barn, other outbuildings, a pool, and a spa.

In July 2008, it was announced that Brit would retire as the anchor of Special Report at the end of the year, but he was to remain on Fox News to execute a few important roles. On the 23rd of December 2008, Brit hosted his final episode as the anchor of Special Report, announcing that Bret Baier, the then-chief White House correspondent for Fox News, would be his replacement.

Brit also announced that he would remain with Fox News as a senior political analyst and a regular panelist for the program Fox News Sunday.

On the 3rd of January, 2010, Hume generated some controversy when on Fox News Sunday he advised golfer Tiger Woods to convert to Christianity to bring an end to his problems. Brit’s comments were made after the revelation of Woods’ adultery scandal and the deterioration of his relationship with his family.

On September 6, 2016, Hume named the anchor of On the Record after the show’s longtime anchor, Greta Van Susteren, left Fox News. He then worked as the program’s anchor through the end of the 2016 elections. Brit’s first show as host of On the Record attracted 2.4 million viewers.

A Career in Journalism Field

How old is Brit Hume?

Where did Brit Hume go to College?

He was educated at St. Albans School in Washington, D.C. Furthermore, in 1965, he graduated from the University of Virginia in Charlottesville, Virginia, with a Bachelor of Arts in English.

How tall is Brit Hume?

He stands at the height of 6 feet 4 inches tall. He has maintained quite a good physique and looks very healthy as well. Likewise, he has brown hair with hazel eyes.