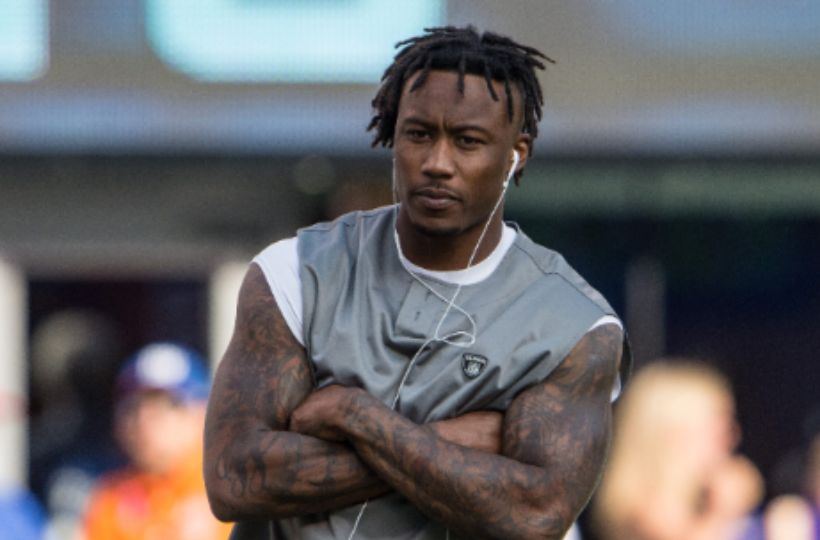 Former American football player, Brandon Marshall is famous for playing in the National Football League for 13 seasons. He started his football career playing college football at UCF and later, started professionally after being drafted by the Denver Broncos in the fourth round in 2006.

How did Brandon Marshall meet his wife?

Brandon Marshall is happily married to his wife, Michi Nogami. The couple met for the first time while attending the same university, the University of Central Florida. After some time, they fell in deep love and got engaged. They finally shared the wedding vows on 17th July 2010, at the Art Deco Paris Theatre in Miami, Florida at a private wedding ceremony where their close friends and family were only invited.

Since then, they are living together and even though they seem to be the happiest couple, things weren’t always like that. Despite several ups and downs in their relationship, they live a life as the happiest life.

Who is Brandon Marshall’s Wife?

Brandon’s wife, Michi Nogami is an American fashion designer and philanthropist. Previously, she worked as a forensic behavioral specialist. Michi has always kept her life away from the media spotlight, so there is not much information regarding her personal or professional life.

Brandon and Michi got in a serious fight both verbally and physically, outside their house at the time of their engagement. During the fight, Michi stabbed Brandon in the abdomen with a kitchen knife. She told the police that she acted in self-defense.

Due to this, she was arrested by American police but she was released the next day on bond, and Brandon made a full recovery after minor surgery.

How many Children does Brandon Marshall have?

Brandon has three children with his wife, Michi. They welcomed their twin daughters in January 2015 while their other child was born in 2019. The couple tries to maintain privacy for their children so they have not disclosed their children’s identity.

Brandon previously dated a lady named Rasheeda Watley. The couple never had a normal relationship as Brandon has been accused multiple times by Rasheeda of domestic violence. Rasheeda accused him more than six times between 2006 and 2008. So, their relationship did not last long and they parted ways.

Who are Brandon Marshall’s Parents?

Brandon’s parents are Diane Bolden (mother) and Fred Marshall (father). His parents were also college sweethearts who were young when Brandon was born. He had a miserable childhood due to his parents’ domestic abuse against each other and his father’s criminal activities.

His parents lived separately at one point, so Brandon grew up in Georgia and Florida with his sister, London Marshall, and a brother, Fred Jr.

Where did Brandon Marshall go to high school?

Brandon finished his high school education at Lake Howell High School in Central Florida. After that, he enrolled at the University of Central Florida, where he was a scholar-athlete.