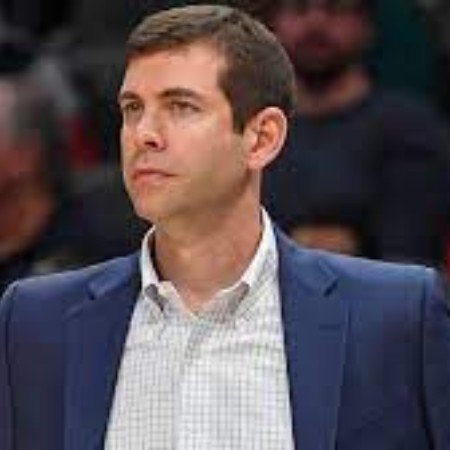 Who is Brad Stevens Wife? Net Worth and Salary in 2022; Bio, Age, Height

An American professional basketball coach and former collegiate player Brad Stevens is well known as the head coach of the Boston Celtics of the NBA.

When was Brad Stevens born?

On October 22, 1976, Brad Stevens was born in  Zionsville, Indiana, United States of America. By birth, his star sign is Libra. As of now, he is 45 years old. He is the son of the father Mark Stevens and the mother Jan Stevens.

His father is an orthopedic surgeon in Indianapolis who played college football for Indiana and his mother is a university professor who has previously taught at Butler. By nationality, He holds an American nationality. Similarly, he belongs white ethnic background.

Talking about his educational qualification, Brad Stevens Joined Zionsville Community High School, where he became a star basketball player. He wore No. 31  in honor of Indiana Pacers guard Reggie Miller in high school. He also got up early to practice shooting at a local gym before school during his freshman year.

Later on, Brad attended attend academically-oriented DePauw University, where he played in all 101 DePauw games. He gained multiple all-conference and academic all-conference awards and was a three-time Academic All-America nominee in his school.

What is Brad Stevens Net Worth and Salary?

Brad Stevens has earned a hefty sum of money from his professional career. According to celebrity net worth, he has an estimated net worth of $6 Million as of 2022. His salary is $3 Million per year. Besides that, he has signed a contract with the Celtics of a six-year deal worth $22 million.

Is Brad Stevens still Married to his Wife?

Talking about the relationship Status, Brad Stevens is a happily married man. He has got married to his lover Tracy Wilhelmy. The couple first met while they were attending DePauw University. They have graduated together on May 22, 1999.

She works as a labor and employment lawyer and also serves as Stevens’ agent. The couple started dating when they were studying together at the University.

After dating for more than five years, Brad and Tracy exchange the vows of their wedding in August 2003. The couple has shared the two children named; Brady Stevens and Kinsley Stevens from their relationship. The exact date of birth of their children is not mentioned on social media. They are involved with the American Cancer Society’s Coaches Vs. Cancer. The couple was living a happy and cheerful life with their family.

Brad stands at a good height of  6 feet 1 inches or 1.85 m tall. Likewise, he has a total body weight of around 89 kg or 197 lbs. Besides that, Brad has a pair of black color hair with silver-gray color hair. F