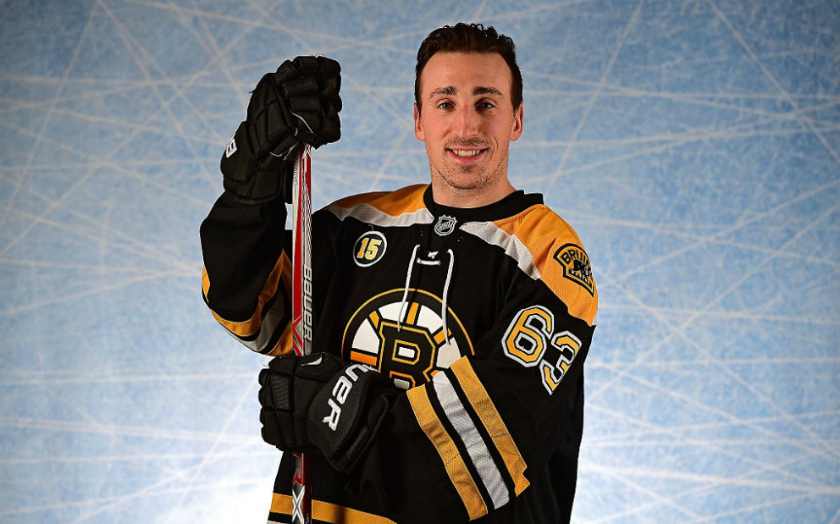 Is Brad Marchand Married? Who is his wife?

Brad Marchand is an ice hockey player from Canada who is currently playing for both Canadian hockey team and the National Hockey League (NHL) as a left wing for the Boston Bruins since his first debut in the year 2006.

He is married to his girlfriend, Katrina Sloane in the year 2015. Scroll down to know more about his marital relationship with his wife, family, and other many interesting facts.

Is Brad Marchand Married? Who is his wife?

Brad Marchand is a happily married to his girlfriend, Katrina Sloane in September 2015. Although there is no report on how the couple met, it has been revealed that Katrina has a son whose name is Sloan from a previous relationship which her husband has now adopted as his son.

Caption: Brad Marchand with his wife, Katrina, and son, Sloan

As a couple, they have been blessed with a child together, who was born in the summer of 2017. As of now, he is living a blissful life with his wife and two children. Also, there is no information about their any extra-marital affairs or divorce.

Brad Marchand was born in a large family that is not alien to athletics. His father, Kevin Marchand has been his coach since he was a child. According to the NHL star, Kevin is his best coach. Other members of his family include his mother, Lynn Marchand, and his grandparents are Melissa Lavallee (grandmother) and Robert Marchand (grandfather).

Where did Brad Marchand play his junior hockey?

Marchand was very interested in playing hockey and his father Kevin became his coach and motivated him to pursue his dreams as an ice hockey player professionally. Brad played his junior hockey in the Quebec Major Junior Hockey League.

Brad grew up playing minor hockey in the Halifax, Nova Scotia area, including AAA midget with the Dartmouth Subways before being a 2nd round pick in the 2004 QMJHL Midget Draft.