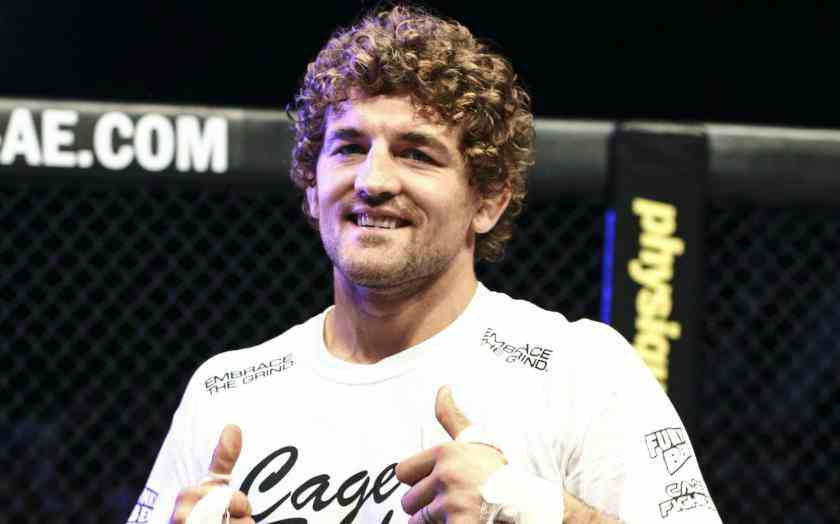 Previously, he was traded to UFC in exchange for Demetrious Johnson from One Championship. Currently, he has signed to the Ultimate Fighting Championship.

What is Ben Askren Net Worth and Salary?

The American mixed martial artist, Ben Askren has an estimated net worth of around $4 million. His disclosed career earnings sum up to $500k. He has a record of 18 wins in his career so he must have earned a hefty amount of win bonus as well.

The mixed martial artist,  Askren was a big winner at UFC 235. He was a former welterweight champion with Bellator and ONE Championship, defeated ex-UFC welterweight champ, Robbie Lawler, through a controversial submission. Askren has earned $350,000 for his UFC debut. Lawler made $200,000. He slammed the Reebok fighter pay after the match and he said:

“I only have to wear Reebok to this. And to the open workout, and to the weigh-ins, and to the fight, all that stuff… They’re not paying me enough though. I got put in that damn first bracket. I didn’t think about that [when I signed with the UFC]. When I thought about it, I probably should have negotiated the Reebok money up ’cause they’re not paying me enough. I think it’s $3,500 only? It’s pretty terrible.”

Net Worth Comparison of Ben Askren with other Mixed Martial Artists

What is Ben Askren MMA Record?

Ben Askren made his professional MMA debut on 7th February 2009 where he defeated Josh flowers via TKO early in the first round. Later, he participated in Bellator Fighting Championship Season 2 Welterweight Tournament and eventually won the title.

After that, he defeated Douglas Lima, Lyman Good, and Nick Thompson. Ben defended the title from 2010 till 2013 as he left Bellator to became an unrestricted free agent.

Ben had attempts at coming in terms with the UFC but things did not work out as Askren claimed the negotiations were dirty. Later, he joined the One Championship in the year 2013 and became the ONE Welterweight Champion after defeating Nobutatsu Suzuki.

He retired from MMA on 24th November 2017, after winning his last fight against Shinya Aoki. He has a record of 18 wins in his MMA career. After retiring from MMA, he fought Robbie Lawler at UFC 235 on 3rd March 2019 and defeated him via rear naked choke in the first round.