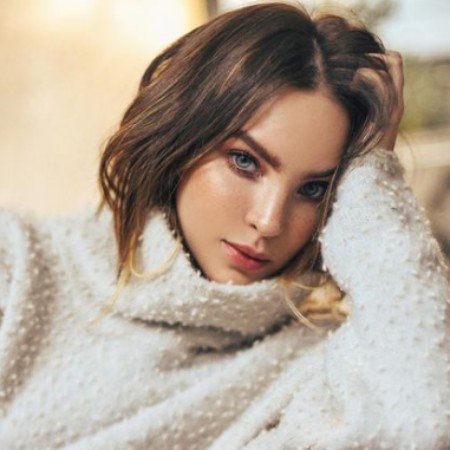 Belinda Peregrín, a Mexican and Spanish singer and songwriter received the spotlight after releasing her debut album, Belinda.

What is Belinda Peregrín’s Nationality?

Belinda Peregrín opened her eyes to this beautiful world on August 15, 1989. She was born in Madrid, Spain. As of 2022, Belinda is 32 years old. Her full name is Belinda Peregrín Schüll. According to her full date of birth, her sun sign is Leo. Belinda celebrates her birthday on the 15th of August every year. She is the daughter of Belinda Schüll Moreno (mother) and Ignacio Peregrín Gutiérrez (father). Her father owned several factories in Europe.

She has a brother named Ignacio Schüll. Likewise, her maternal grandparent’s name is Pierre Schüll and Juana Moreno de la Plaza. He was the late famous French bullfighter. Her paternal grandmother was María Luz Gutiérrez Cano. Likewise, Belinda is a cousin of fashion designer Simon Porte Jacquemus. By nationality, she holds Mexican and Spanish nationality. Belinda belongs to French and Spanish ethnic backgrounds. Similarly, she follows Christianity as a religion.

Who is Belinda Peregrín in a relationship with?

Belinda is living a single life and is more focused on her career rather than on some sort of romantic relationship. She was previously in a relationship with Christian Nodal. By profession, her ex-boyfriend is a Mexican singer.  Belinda met Christian while working together on La Voz. The duo started dating each other on July 4, 2020. After dating each other for some time they thought about taking the next step and engaged in May 2021.

However, the duo didn’t seem to be in a good relationship. In the year 2022, the duo made a decision and spilt. The engagement took place in a restaurant in Barcelona. Belinda was also in a relationship with Criss Angel from 2016 to 2017. She was previously in a relationship with soccer star Giovani dos Santos. She was seen with Maluma from 2014 to 2015, and Nelly (El Arma Secreta) in 2011.

How much was the engagement ring of Belinda Peregrín?

Belinda’s engagement ring was 12 carats. According to the source it is estimated to have cost $3 million. The ring was given to her while her ex-boyfriend was proposing to her.

Did Christian Nodal get a tattoo of Belinda?

Yes, Christopher got a tattoo of Belinda. He got the tattoo of her eyes on his chest. As for now,  he has covered his tattoo with many other tattoos.

How much is Belinda Peregrín’s Net Worth?

Aside from her career Belinda, must be earning an extra sum of money from ads, sponsorship, and brand endorsement. Her career leads her to live a luxurious and lavish life. Likewise, she has also earned a name and fame at the same time as her career. In the coming days and in the future her net worth and salary will rise even higher.

Where is Belinda Peregrín’s House?

Belinda has bought a $4.25 million modern home full of custom art. Her house is a 4,855-square-foot interior that includes recessed lighting, an Italian kitchen, and a dual-sided stone fireplace that runs floor to ceiling. Similarly, the second story has five bedrooms and 6.25 bathrooms. Similarly, her bedroom is open to private balconies. In the master suite, there’s a built-in fireplace and custom shoe closet.

Are Belinda Peregrín and Belinda Carlisle the same person?

No, Belinda Peregrin and Belinda Carlisle are not the same people. They just happen to have the same name and are not related by blood. By profession one of them is a Mexican-Spanish singer and the other is an American singer.

What is Belinda Peregrín’s Height?

Belinda stands at a height of 5 feet 6 inches. According to her height, she has a body weight of around 57kg. Similarly, her total body measurement is 32-24-33 inches. Her body measurement includes all her hip size, waist size, and chest size. Also, Belinda has an alluring pair of blue eyes and beautiful long brown hair.

Does Belinda Peregrín have tattoos?

No, Belinda doesn’t seem to have tattoos. But in the future, she may get a tattoo that is meaningful full, and beautiful in her body.

What is the nationality of Belinda Peregrín?

Belinda holds Mexican and Spanish citizenship as a nationality.

Did Christian Nodal get a tattoo of Belinda?

Yes, Christopher got a tattoo of Belinda. He got the tattoo of her eyes on his chest. As for now,  he has covered his tattoo with many other tattoos.

How much is Belinda Peregrín’s Net Worth?

Belinda has an estimated net worth of around $10 million in 2022.