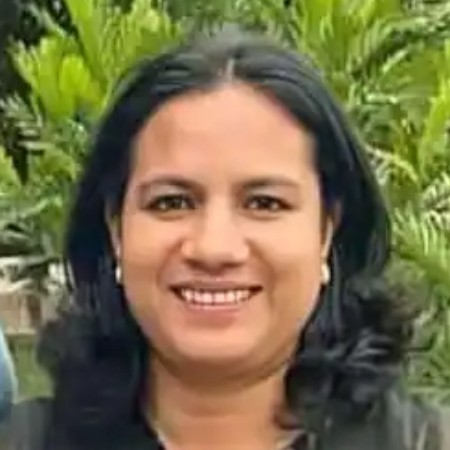 Ashwini Revanath is a designer and movie producer. She is famous as the wife of an Indian actor, playback singer, television presenter, and producer Puneeth Rajkumar.

What is Ashwini Revanath’s Age?

Ashwini Revanath opened her eyes to this beautiful world on March 14, 1981. She was born in Bengaluru, Karnataka, India. As of 2022, she is 41 years old. According to her full date of birth, her sun sign is Pisces. Ashwini celebrates her birthday on the 14th of March every year.

She is the daughter of  Bagmane Revanath (father). By profession, her father was a Chief Engineer at the National Highways Authority of India. Nationality, she holds Indian citizenship and follows Hinduism as a nationality. Similarly, she belongs to Kannada ethnic background.

What happened to Ashwini Revanath’s Father?

Ashwini’s father Bagmane departed from this world on February 21, 2022. He died from a massive heart attack. Ashwini’s father was just 78 years old at the time of his death.

After the sudden change in his health, he was rushed to the M.S. Ramaiah Hospital where he breathed his last. After his death, he also donated his eyes to the people just like his son-in-law.

Who is Ashwini Revanath in a relationship with?

Currently, Ashwini is living a single life. She was once a married woman. But as of now, she is living a single life. She is more focused on her design career now. She has given her full attention and focuses on her career and profession. Likewise, she is also spending quality time with her children rather than involving in some sort of relationship.

Ashwini was previously in a conjugal relationship with her late husband Puneeth Rajkumar. The duo met each other through a common friend after he completed his studies. After they met Puneeth knew that she was the one for him and proposed to her. Apparently, Ashwini immediately agreed to his proposal.

After dating each other for some time they finally tied the knot on 1 December 1999. At the wedding their friends and families were present. The duo said the marriage vows in a traditional Indian style. They were happy in their conjugal life. But what happened didn’t last long as her husband departed from this world.

Does Ashwini Revanath have children?

Yes, Ashwini is the mother of two children. She and her late husband Puneeth gave birth to two adorable children. Their names are Vanditha Rajkumar and Drithi Rajkumar

Ashwini’s husband Puneeth departed from this world on 29 October 2021. He was just 41 years old at the time of his death. Before his death, he complained about uneasiness to his wife Ashwini. While departing to the hospital he took his last breath.

The reason for his death is said to be cardiac arrest. After his death, he donated his eyes. It was a pledge made by his late father that he along with all his family members will donate their eyes after death. Because of their donation, four people got their eye site back.

Where was Puneeth Rajkumar’s body kept?

Puneeth’s body was kept for public view at Kanteerava stadium for 3 days. His dead body was attended by more than 25 lakh people. Then after three days, he was buried alongside his parents at Sree Kanteerava Studios in Bangalore

What is the net worth of Ashwini Revanath?

She must be receiving the same amount from her career. Likewise, her husband Puneeth Rajkumar had an estimated net worth of around 187 Crore INR at the time of his death. He was able to make a hefty sum of money from his long-term career as an actor, playback singer, television presenter, and producer. Puneeth was one of the richest actors in India. He also had an annual salary of around $1 million.

Where is late Puneeth Rajkumar’s house?

How tall is Ashwini Revanath?

Ashwini stands at a height of 5 feet 6 inches. According to her height, she has a body weight of around 62 kg. Similarly, her total body measurement is 34-30-25 inches. Ashwini has an alluring pair of black eyes and long beautiful black hair.

What is the nationality of Ashwini Revanath?

What is Ashwini Revanath’s height?

Ashwini stands at a height of 5 feet 6 inches tall.

What is Ashwini Revanath famous for?

Ashwini Revanath is a designer and movie producer and is also famous as the wife of an Indian actor, playback singer, television presenter, and producer Puneeth Rajkumar.