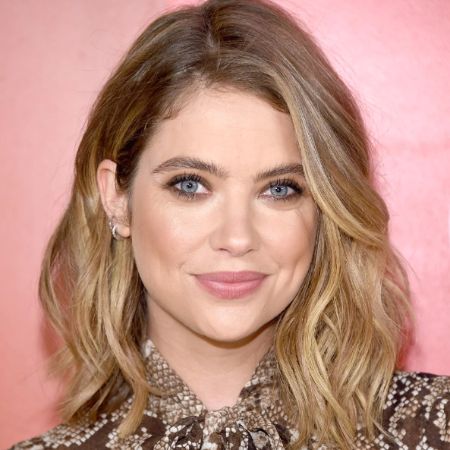 An American actress, model, and singer Ashley Benson rose to the limelight for her portrayal of Hanna Marin in the teen drama series Pretty Little Liars.

Where is Ashley Benson from?

Ashley Benson opened her eyes to this beautiful world on December 18, 1989. She was born in Anaheim Hills, California, United States of America. As of 2022, she is 32 years old and her zodiac sign is Sagittarius. By birth, her real name is Ashley Victoria Benson. Usually, she celebrates her birthday on the 18th of December every year.

Her father’s name is Jeff Benson and her mother’s name is Shannon Harte. Similarly, she grew up with her sister. Ashley’s elder sister’s name is Shaylene Benson. Her sister is also an actress by profession. Her grandparents’ names are Wayne Benson, Margaret Louise Alderson, Bill Harte, and Mary Kay Mullen.

As a nationality, she holds American citizenship while she belongs to a mixed (English, German, more distant Danish Irish) ethnic background. Moreover, she follows Christianity as a religion.

What is the education qualification of Ashley Benson?

According to the source, she seems to be bisexual. But she hasn’t made her sexual orientation public yet. But she is dating him G-Eazy at the moment.

Ashley is in a romantic relationship with G-Eazy. Her boyfriend is an American rapper by profession. His real name is Gerald Earl Gillum. Ashley and G-Eazy began dating in May of 2020 after being seen holding hands and kissing.

She has an on-again, off-again relationship with rapper G-Eazy. According to Us, in January 2022 they are officially back together as they were spotted together in Los Angeles.

Is Ashley Benson and Cara Delevingne still together?

No, Ashley and Cara Delevingne aren’t together. Ashley and Cara met for the first time on the set while shooting the movie Her Smell in 2018. Cara played Crassie Cassie and Ashley played Roxie Rotten in the movie. Their relationship was made public in May 2018.

After dating for two years, they broke up in 2020. As soon as they broke up, Ashley patched up with G-Easy. Cara wrote and posted on her Instagram story saying that

“It’s more important than ever to spread love, not hate. To everyone hating on @ashleybenson please stop. You don’t know the truth, only her and I do and that’s exactly how it should be.”

Who did Ashley Benson date?

After breaking up with Ryan, she was in a relationship with Chord Overstreet. A chord is an American actor and musician. They started dating in 2012 and broke up in the same year. She was also seen with Tyler Blackburn (2013 – 2016).

How much is Ashley Benson’s Net Worth?

On the other hand, her boyfriend’s net worth is around $12 million. G-Eazy earns this million amount from his professional career as an American rapper. According to some online resources, the average salary of an American rapper ranges from $18,720 to $141,440 a year.

Where does Ashley Benson live now?

Ashley lives in Los Angeles, California, United States. It is a large Southern California city that serves as the center of the country’s film and television industries. Los Angeles is famous for its Mediterranean climate, ethnic and cultural variety, film industry, and wide metropolitan region.

Ashley is fond of collecting cars. She has collected various cars such as Ferrari 488 GTB, Chevrolet Corvette, Range Rover SV A, Mercedes-Benz GLE,  Audi Q7, Audi S5, Honda Accord, and Mercedes E-Class. Her Car Collection has the most luxurious vehicles available.

Yes, Shay and Ashley are friends. They are popular for their nickname mashup #ButtahBenzo. Both of them are actors by profession.

How tall is Ashley Benson?

Ashley stands 5 feet 3 inches tall while her body weight is 54 kg. Similarly, she has a perfect body structure that measures 36-25-34 inches. She wears a bra size of 34 cup B. Likewise, she has an alluring pair of blue eyes and her hair color is blonde.

Did Ashley Benson have surgery?

Yes, Ashley went through surgery. She did eyelid surgery. Likewise, she got a filter that augmented her face to look like she just got botox with fresh lips and cheek fillers.

Does Ashley Benson have any tattoos?

Yes, Ashley has tattoos engraved on her body. She has most of her tattoos on her arms and rib cage, but she also has a secret smiling face and heart on her middle finger and a 13 on her hip.