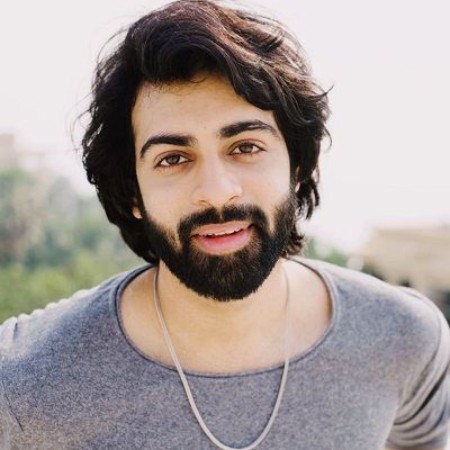 What is the Age of Anmol Thakeria Dhillon?

Anmol Thakeria Dhillon was born on 4th April 1996, in Mumbai, Maharashtra, India to Indian parents. As of 2022, he is at the age of 26 years old and his horoscope is Aries. Every year, Anmol celebrates his birthday on 4th April. He is the son of Ashok Thakeria (father) and Poonam Dhillon (mother). His father is an Indian film producer while his mother is an actor and politician.

Anmol’s maternal grandparents are Amreek Singh and Gurcharan Kaur. His grandfather is an aeronautical engineer and his grandmother was a school principal. His maternal uncle and aunts are doctors. He grew up with his sister, Paloma Thakeria Dhillon. As per nationality, Anmol is an Indian while he belongs to mixed ethnic background.

What is the Net Worth of Anmol Thakeria Dhillon?

Anmol Thakeria Dhillon has an estimated net worth of around $400k as of 2022 which he earned through his acting career. According to some online resources, the average salary of an actor in India is ₹11,00,000. So. Anmol might be earning the same range of amount but he has not mentioned the actual figure of his salary with the media.

Besides, he is earning some amount through endorsements, advertisements, and sponsorships of several brands and companies via social media posts. As Anmol is a hardworking guy, his net worth and salary will undoubtedly rise higher in the future days. Anmol lives a lavish and fulfilling lifestyle with his family members in India.

Does Anmol Thakeria Dhillon have a Girlfriend?

Anmol is single so he does not have a girlfriend at the moment. He has not mentioned any girl as his girlfriend or partner for now. Previously, he was in a relationship with some mysterious lady. He shared this information with some online media. He said:

“It was probably a decade ago when I was studying in Los Angeles and was in a relationship with a girl in Mumbai. We were in a long-distance romance and would chat online. I had got a week off from university and without telling her, caught a long flight from LA to Mumbai, just to land up at her house after six months of not seeing her, I had to lie about my laptop failing and needing repairs just to make up an excuse for not being in touch for the duration of the long flight, to surprise her. I think that was the craziest thing I did, but she was also really excited that I took the effort.”

He seems to be more focused on his professional career as a rising actor rather than being with anyone else. When Anmol is ready, he will surely be with someone whom he loves. Besides, Anmol has never been a part of any rumors or controversies regarding his personal or professional life.

How Tall is Anmol Thakeria Dhillon?

Anmol stands at a height of 5 feet 10 inches while his body weight is 75kg. His chest size, waist size, and biceps size are 38 inches, 32 inches, and 15 inches. Anmol’s hair and eyes are brown in color.

The Career of Anmol Thakeria Dhillon

Why is Anmol Thakeria Dhillon famous?

Where was Anmol Thakeria Dhillon born?

Anmol was born in India.

What is the nationality of Anmol Thakeria Dhillon?

Anmol is Indian by nationality.