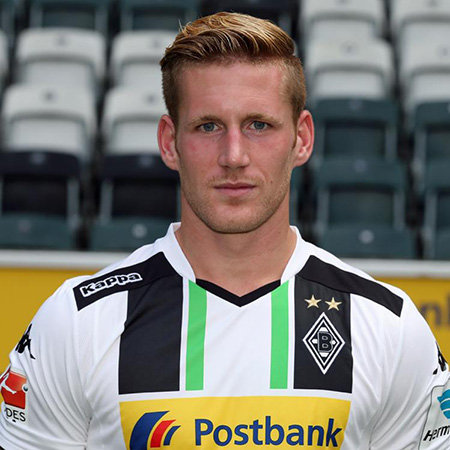 Andre Hahn is a professional German football player who currently plays for Bundesliga side Hamburger SV as a winger.

Andre Hahn was born on 13th August 1990 in Otterndorf, West Germany to German parents. As of 2022, he is 32 years old and his horoscope is Leo. He is the son of Andreas Hahn (father). Andre holds German nationality and belongs to white ethnical background.

Andre Hahn is unmarried but he is in a romantic relationship with Ragna Bauer. The couple has been living in the North Rhine, Westphalia since the year 2015. However, there is no information about their first met. The couple didn’t have any children to date.

How much is Andre Hahn’s Net Worth and Salary as of 2022?

Andre Hahn has an estimated net worth of above $6 million as of 2022 and he receives an annual salary of €3 million. Moreover, he has a market value of £8m, his estimated cost is £12m and his wage is around £38k. However, his contract expires on 30th June 2021.

Klaus Michael Kuhne, the Hamburg investor is willing to provide funds for the transfer of Andre in case the club kept U.S. international Bobby Wood. Hamburg signed him on a 4-year contract from Borussia Monchengladbach for a reported fee of €6m.

Andre stands at a height of 6 feet tall and his body weight is around 77 kg. Hahn has light brown colored hair and his eyes are blue in color.

He has got many tattoos on his various body parts such as the chest, hand, and wrist.

Andre began his career with Hamburger SV II, which he joined in the year 2008.

After two years, he signed for FC Oberneuland where he made an immediate impact, scoring eight goals in fifteen matches in the first half of the 2010–2011 season.

In January 2011, he moved to TuS Koblenz of the 3. Liga. Hahn made his Koblenz debut as a substitute for Thomas Klasen in a 3–2 win over Rot-Weiss Ahlen and made another fifteen appearances as the club finished the 11th season. However, Koblenz withdrew from the 3 Liga due to financial difficulties that led Andre to leave the club.

After that, he was snapped up by Kickers Offenbach, another club competing in the third tier.

After a successful eighteen months with Kickers, he signed for FC Augsburg of the Bundesliga in January 2013. Andre quickly established his place, starting 12 matches in the second half of the 12/13 season, and finally helped keep FC Augsburg from getting relegated to 2 Bundesliga.

He further cemented his role in the 2013–14 season with his eye-catching performance. Andre contributed 6 goals for FC Augsburg before the winter break.

In the year 2014, he joined the German Bundesliga side Borussia Mönchengladbach.

Andre rejoined former Augsburg for an undisclosed fee on 30th May 2018, signing a four-year deal until 2022. Speaking about his transfer, He said:

“I’m happy to be back in Augsburg as I feel very at ease here and have much to thank the club for. The club has once again placed its trust in me, and I’d like to repay that the club, all the management and the fans for that.”

What is the nationality of Andre Hahn?

How much is Andre Hahn’s Net Worth?

Andre Hahn has an estimated net worth of above $6 million as of 2022.

How much is Andre Hahn’s net worth?

Andre stands at a height of 6 feet tall.